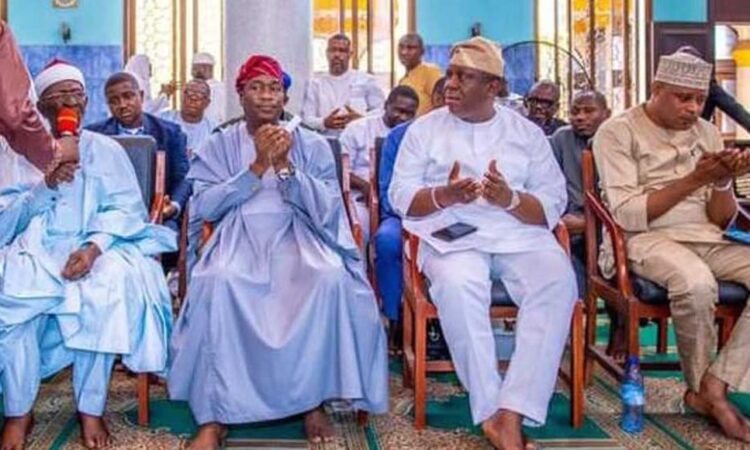 Council of Chief Imams and Ulama (COCIU), in Lagos State, has organised a special prayer for Presidential Candidate of the All Progressives Congress (APC), Asiwaju Bola Ahmed Tinubu, to emerge president of Nigeria in 2023, he remains the best candidate to replace President Muhammadu Buhari.

The clerics also pray for Governor Babajide Sanwo-Olu and other APC aspirants. Speaking at the prayer session, The Lagos Deputy Governor, Obafemi Hamzat, urged Lagosians to ensure that their votes count in the forth-coming general election.

“Go out and vote for Tinubu and Sanwo-Olu, so that the best people are elected to power. In 2019, only 29 per cent of Lagosians came out to vote, but in other states like Kano and Katsina about 50 to 60 per cent of people voted. So, the idea is that we should all go out to vote so that we can elect the right person and in this case, we believe in Tinubu.” He added that the prayer is to seek God’s intervention, “as we believe Almighty Allah determines everything.”

“We are praying that God protects us and guides our ways. God has given each individual a different capacity. Based on antecedent and experience, Asiwaju Bola Tinubu has what it takes in terms of purpose, networking, knowledge and political achievement, he is the best presidential candidate for Nigeria in 2023. He added that with Tinubu’s political success and Sawo-Olu’s achievements in Lagos State, Nigeria would be better.

“We believe when Tinubu becomes president of Nigeria, our story can only be positive. He has a framework in his manifesto to ensure peace in the country, grow the economy and eliminate poverty.”

Bashorun Musulumi of Lagos, Alhaji Sikiru Alabi-Macfoy, urged clerics to sensitise their congregation to vote right as the 2023 election will be different from previous elections.

“This is an opportunity for somebody from southwest to get to power, get and also encourage your families, neighbours and congregation to vote for Tinubu,” he said.

The guest lecturer, Dr . Lukman Adedeji, urged clerics to caution aspirants and advise them on the dos and don’ts of Almighty, as they are the ones close to them.

The General Secretary for Chief Imam in Lagos State, Dr. Morufdeen Adeniyi Shittu said the ulamas have a firm belief that prayer can move mountains, and that is why the prayer sessions, which began in November, was organized and ended yesterday.

“To back him, the Chief Imaams under the leadership of the Grand Chief Imam of Lagos State, Sheikh Sulaiman Oluwatoyin Abou-Nolla, with Chief Imams in Ikorodu, Badagry, Ikeja and Epe came together to pray for him.”