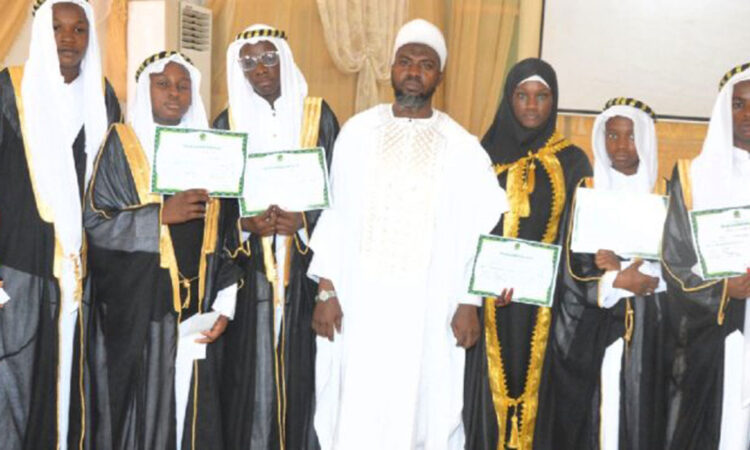 The Lekki Qur’an Memorisation College (LQMC) has groomed six young teenagers to memorise the entire chapters of the Holy Qur’an and other aspects of Islamic theology.

Speaking during the third haflah convocation of the college held Sunday, September 11, 2022, Chairman, Board of Governors, Lekki Muslim Ummah Group of Schools, Adeniji Kazeem SAN, congratulated the graduands, saying that their accomplishment is worthy of emulation.He urged the students to be good ambassadors of Islam while encouraging them to seek knowledge of the meaning of the Qur’an they have memorised.

“Dear graduands! Your accomplishment is worthy of emulation. It is short of nothing but dedication and perseverance. You have succeeded where others have failed. This is a special favour from Allah that you cannot deny but appreciate. Did I hear you say Alhamdulillah? Could we all join them to say ALHAMDULILLAH!

He expressed gratitude to the parents for their sacrifice in bringing their children to college, assuring them of quality.

“Our mandate and promise to you is quality and standard of excellence. This is one of the reasons we have employed a new school administrator whose expertise in educational quality assurance is evidenced in his professional qualification and experience.

“He has done an assessment of the practices at LQMC and submitted a developmental plan which we the BOG with the support of LEMU executives and the BOT, are committed to implementing for your children to have the best educational experience, in shaa Allah.”

Chief Imam, Lekki Central Mosque, Sheikh Ridwan Jamiu, thanked Allah for the success of the memorisation classes and graduation ceremony, as he also congratulated the graduands, whom he described as “the Noble stars of Islam”.

According to him, “Allah has chosen some people to preserve the Qur’an. Part of those Allah is using are those who memorise the Qur’an and their teachers. The Qur’an is the light of the world. Without light, the world would be in darkness.

This is why what we are doing today is one of the best things to happen to anyone.

“Anyone that Allah has allowed his child to memorise the Qur’an, it is one of the best things Allah has done to such an individual. The reward for it is not only in this world, but also hereafter. Children who have memorised the Qur’an are going to be better ambassadors for Islam. They are going to serve humanity and Islam better than those who do not know about the Qur’an.”

Imam Ridwan couldn’t hide his joy as two of his children were among the graduands. He said, “I am humbled and appreciate Allah who has made that feat possible. It’s a great day for me. Alhamdulilah!.”

The Imam, therefore, advised that it is best to get children to memorise the Qur’an at their tender age, noting they have fewer things to think about during that period.

“The best thing is to get children to memorise the Quran at a tender age, especially when they have finished their primary education. After that, let them go and learn the Qur’an within two or three years. Thereafter, they can proceed with their conventional education. It is easier for them to memorise when they are young. They don’t have many things to think about like adults whose minds are always occupied. Children have a very good retentive memory. The best thing is to catch them young. Get them to memorise the Qur’an so that it can be part and parcel of their lives. When they grow up, they can now learn the sciences and other aspects of the Qur’an.

“We do encourage their parents to bring them here during Ramadan, especially for I’tikaaf. They stay here for the last 10 days of Ramadan so that they can have an opportunity to read the Qur’an and even lead us in tarawih prayers,” the scholar explained as part of the strategies used to sustain the memorisation in the students.

Graduands, Umar AbdulAzeez said he was happy to be among the successful memorisers of the Qur’an that graduated this year. He explained that the journey appeared a bit challenging at the beginning, but with time and consistent practice, everything went easier.

Another graduand, Ibraheem Ridwan, 13, told Muslim News that it took him two years to learn the whole of the Qur’an.

“I memorise at least three to four pages per day and do consistent revision at night. The biggest challenge I had was memorising the longest chapter of the Qur’an (Suratul Baqarah). It was quite challenging,” he said. He encouraged parents to enrol their children in the college, saying they experienced quality teaching and care.