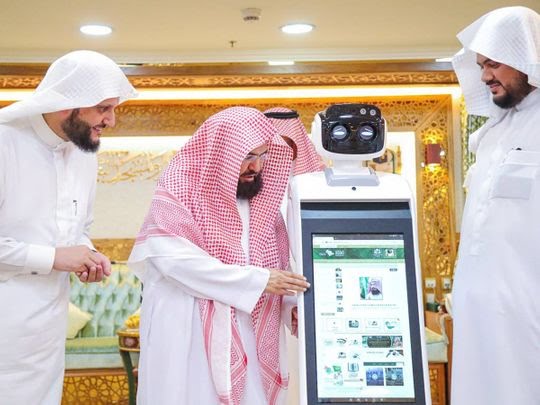 In its latest step to utilise artificial intelligence (AI) at the Grand Mosque in Mecca, Saudi Arabia has launched robots for the Holy Quran recitation and sermons to serve the faithful in Islam’s holiest site.

The robots display barcodes enabling users to download their services on personal smartphones or press commands on the robots to access information on prayer imams, muezzins, weekly schedules including names of clerics delivering the weekly Friday sermons.

The advanced machines were launched by Chief of the General Presidency for Affairs of the Two Holy Mosque Sheikh Abdul Rahman Al Sudais. “The launch is part of a massive-scale strategy that aims not only to launch more smart robots at the two holy mosques, but to implement the Smart Haram [Holy Mosque] Project according to the blessed [Saudi] Vision 2030,” he said, referring to the kingdom’s ambitious development scheme.

In recent months, a series of robots have been launched into service at the Grand Mosque for providing fatwas (religious edicts), sterilisation and cleaning the rooftop of the Holy Kaaba housed at the mosque, visited by millions of Muslims from around the world.