Dating is the process whereby two people meet socially for companionship beyond the level of friendship, or with the aim of appraising each other’s suitability as a partner in an intimate relationship or marriage. It can be a form of courtship consisting of social activities done by the couple. Dating as an institution is a relatively recent phenomenon which has mainly emerged in the last few centuries. The protocols and practices of dating, and the terms used to describe it, vary considerably from country to country and over time.

“Dating” as it is currently practiced in much of the world does not exist among Muslims. The process whereby a young man and woman are in a one-on-one intimate relationship, spending time together alone, “getting to know each other” in a very deep way before deciding whether that’s the person they want to marry. Rather, in Islam pre-marital relationships of any kind between members of the opposite sex are forbidden.

Dating encourages people to deliberately stares and seeks out the one that is attractive among the men and women whereas these verses say that believing men and women should lower their gaze.

The question we should ask ourselves as young men and women is that if dating is not allowed in Islam, how does one decide on whom to marry?

The choice of a marriage partner is one of the most important decisions a person will make in his or her lifetime. It should not be taken lightly, nor left to chance or influences. It should be taken as seriously as any other major decision in life; with prayer, careful investigation, and family involvement.

First of all, Muslim youth develop very close friendships with their same-sex peers. This “sisterhood” or “brotherhood” that develops when they are young continues throughout their lives, and serves as a network to become familiar with other families. When a young person decides to get married, the following steps should be taking into consideration.

1. The young person should make ‘dua’ pray for Allah to help him or her find the right person.

2. The family enquires, discusses, and suggests candidates from among the network of people that they know. They consult with each other to narrow down potential prospects. Usually the father or mother approaches the other family to suggest a meeting.

3. If the young couple and their families agree, the couple meets in an open place and should not be alone. Umar related that the Prophet Muhammad (SAW) said, “Not one of you should meet a woman alone unless she is accompanied by a relative (mahram).” The Prophet (SAW) also reportedly said, “Whenever a man is alone with a woman, Satan is the third among them.” When young people are getting to know each other, being alone together is a temptation toward wrongdoing. At all times, Muslims should follow the commands of the above Qur’an verse. Islam recognizes that we are human and are given to human weakness, so this rule provides safeguards for our own sake.

If the couple seems compatible, the families may investigate further – talking with friends, family, Islamic leaders, co-workers, etc. to learn about the character of the potential spouse.

Before making a final decision, the couple prays salat-l-istikhara (prayer for guidance) to seek Allah’s help and guidance.

The couple agrees to pursue marriage or part ways. Islam has given this freedom of choice to both young men and women – they cannot be forced into a marriage that they don’t want.

This type of focused courtship helps ensure the strength of the marriage, by drawing upon family elders’ wisdom and guidance in this important life decision. Family involvement in the choice of a marriage partner helps assure that the choice is based not on romantic notions, but rather on a careful, objective evaluation of the compatibility of the couple. That is why these marriages often prove successful in the long-term.

Brothers and sisters in Islam, will you like to share your story on how you meet your husband or wife? Was your family involved in introducing you to potential suitors? Did you meet your spouse at work or in university? Was it an arranged marriage? Did you go on dates alone or with a group? What were you looking for in a potential life partner? Help future couples by sharing your story with us. 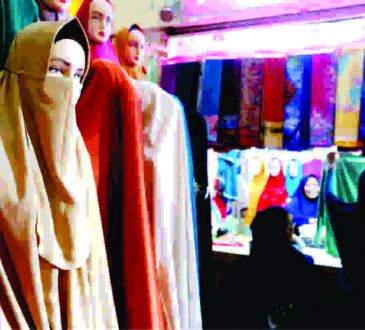 admin3 months agoSeptember 2, 2022
70
The world of fashion constantly witnesses something new from time to time. A new term has been invented in the...
LIFESTYLE

admin2 years agoMay 3, 2021
327
The Fashion Commission has finalized its strategy to develop the sector, including educational and training programs to prepare graduates for the labor market, providing outlets for the distribution of locally designed products, and building networks between designers and investors. The strategy’s aim is to enhance the national identity of the fashion industry and to serve designers, investors and creatives in all sector-related fields. Fashion Commission CEO Burak Cakmak, who was appointed to the role earlier this year, said the strategy was crafted to ensure that the right infrastructure was being...
LIFESTYLE

admin2 years agoOctober 1, 2020
301
Muslims constantly strive to remember and practice Islamic virtues, and put them into practice throughout their daily lives. Among these great Islamic virtues are submission to Allah, self-restraint, discipline, sacrifice, patience, brotherhood, generosity, and humility.In English, the word "humility" comes from the Latin root word which means "ground." Humility, or being humble, means that one is modest, submissive and respectful, not proud and arrogant. You lower yourself to the ground, not elevate yourself above others.In prayer, Muslims prostrate themselves to the ground, acknowledging human beings' humbleness before the Lord of...
LIFESTYLE

How To Deal With Anger

admin2 years agoSeptember 25, 2020
389
Anger is one of the evil whispers of Shaytaan, which leads to so many evils and tragedies, of which only Allah knows their full extent. For this reason Islam has a great deal to say about this bad characteristic, and the Prophet (SAW) described cures for this "disease" and ways to limit its effects, among which are the following: (1) Seeking refuge with Allah from the Shaytaan: Sulayman ibn Sard said: "I was sitting with the Prophet (SAW), and two men were slandering one another. One of them was red...