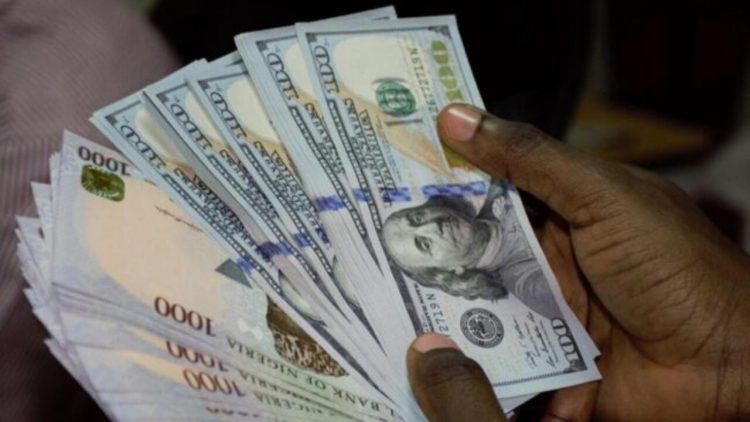 The dollar exchanged at N600 on Monday at the parallel market, heightening fears of a further devaluation of the nation’s currency.
The rate at the Importers and Exporters Window was, however, N415.75 on Monday, widening the exchange rate spread to N184.25.
At Zone 4 in Abuja, which is the hub of the parallel market in the Federal Capital Territory, two Bureau de Change Operators, Mohammed Isa, and Abu Abdullahi, told The PUNCH that the rate was N599/$ at 10am and 11.14am respectively.
However, the rates for both BDCs changed to N600/$ when they were separately contacted at N3.13pm and N5pm respectively on Monday.
“If I reduce this by N1, I will not be able to make any profit,” one of the two BDCs, Abu Abdullahi, said.
At the Lagos airport on Monday, a BDC operator, Adamu Haruna, told The PUNCH that the rate was “N600/$, no more, no less.”
A BDC operator at Amuwo-Odofin in Lagos, Bala Usman, gave an initial rate of N598/$ in the morning but changed to N599 at 2.53pm when contacted.
“The demand is increasing and the dollar is very scarce now,” he said.
Naira has weakened in the parallel market due to increased speculations, falling external reserves, and low foreign exchange inflows into Africa’s biggest oil producer.
The country’s external reserves fell by $313m in March, according to figures obtained from the Central Bank of Nigeria.
Politics is also a key factor, as experts see politicians mopping up dollars for election primaries this month.
The President, Association of Bureaux de Change Operators of Nigeria, Alhaji Aminu Gwadabe, told The PUNCH that the situation was caused by several factors, including elections, loss of confidence, and demand/ supply.
“It is a market where demand and supply determine the price. Do not forget that election years are associated with foreign exchange volatility, coupled with supply squeeze. External reserves, inflation, cost of inputs, and the Russia-Ukraine war are also key issues,” he said, arguing that there was indeed a loss of confidence, saying that “once people see the exchange rate rising, the confidence will also fall.”
The Director of Research and Strategy, Chapel Hill Denham, Mr Tajudeen Ibrahim, told The PUNCH that the issue in the foreign exchange market could be attributed to falling external reserves and uncertainty in the economy.
“The parallel market is speculative. One of the causes is the foreign exchange reserves. Secondly, there is no indication that Nigeria is going to see an inflow of foreign exchange that can underpin the FX reserves any time soon,” he said.
“There is nothing like Eurobond. There are no indications for other borrowings, so there is no clear indication of inflows. This is also one of the reasons for what we see in the market,” he said.
He explained that it was possible that the market was seeing an election-related demand.
He urged the Central Bank of Nigeria to devalue the naira to match the parallel market rate, while also managing the market to ensure that unforeseen circumstances did not happen.

On his part, the Chief Executive Officer of Centre for the Promotion of the Private Sector, Dr Muda Yusuf, urged the CBN to float the exchange rate market to provide clarity for investors and allow the market to be determined by the forces of demand and supply.
Yusuf said the CBN’s current approach would continue to deepen distortions in the economy, perpetuate round-tripping, fuel speculation, and suppress forex supply.
On the other hand, Nigeria is a deeply import-dependent economy, relying on crude oil for over 80 per cent of the foreign exchange.
The non-oil sector inflows are still 10-20 per cent and most of the export products are raw materials and agricultural commodities.
The Manufacturers Association of Nigeria said only a strong manufacturing sector could raise the productive capacity of the country, reduce importation and increase FX inflows from non-oil exports.