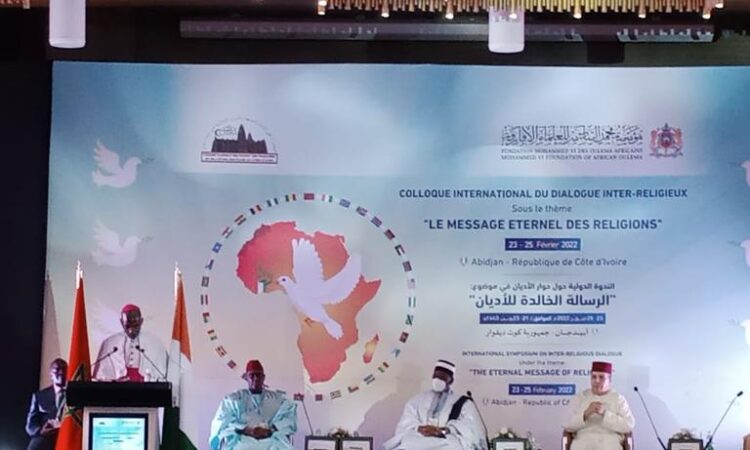 Muslims scholars and Christian Clerics, at the opening of the International Interfaith Symposium in Abidjan yesterday, preached against religious extremism in Africa and the rest of the world.

The three-day event, organized by the Superior Council of Imams, Mosques and Islamic Affairs of Côte d’Ivoire and Mohammed VI Foundation, was declared open by the Ivorian Minister of Home Affairs and Security, Vagondo Diomande.

He said both Christians and Muslims had been living peacefully in Cote d’Ivoire, advising the participants to work in the direction of cohesion and religious extremism.

Leaders of various faiths, who spoke at the event, stressed the need for believers to foster the spirit of peace, tolerance and defeat terrorism.

The president of the foundation in Cote d’Ivoire, Sheikh Mostafa Sonta, noted that extremism is the greatest threat that the world is currently facing.

President, Catholic Bishops Conference of  Cote d’Ivoire Metropolitan, Archbishops of Korhogo, Ignace Dogbo Bessi, described the dialogue as an opportunity for all faithful to live peacefully together as one.

He said all prophets of God were given the message of peace to their disciples. “So, this symposium is a great message not only to Muslims or Christians, but to Africans in general”.

He described Africa as a great continent with a lot of history requiring cooperation and dialogue among its diverse population for its unity and progress.

He said the symposium would deepen dialogue between the religions by common points of the leaders of the respective religions in the continent.