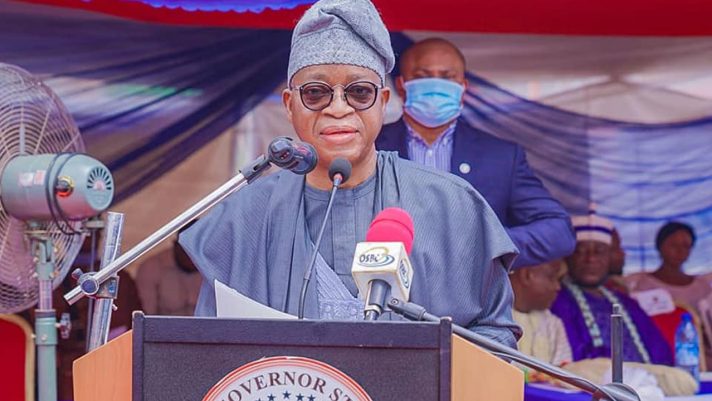 Osun State Governor, Gboyega Oyetola has been asked to intervene in the looming religious crisis over the appointment of the Chief Imaam of Iwo Central Mosque.

The Board of Trustees of the Mosque had appointed a Chief Imam but the step infuriated some Muslims in the community who staged a protest against it on Wednesday.

Addressing journalists, a leader in the community, High Chief Abiola Ogundokun, accused the traditional ruler of

Iwo land, Oba Abdulrosheed Adewale Akanbi of masterminding the protest and called on Governor Oyetola to urgently wade in.

Ogundokun, the Chairman, Iwo Central Mosque Board of Trustees said the board has the right to appoint the Chief Imaam, saying that the Chief Imaam appointed by Oluwo of Iwo lacks requirements of leading Islamic prayer due to ill health.

He said Iwo is in trouble and that the silence of the state government was not helping the matter. Ogundokun said Oba Akanbi does not have the power to appoint Chief Imaam for the mosque, adding that “he (Oba Akanbi) is not the Oba of Islam but the Oba of the town.”

Ogundokun further stated “We have been legally appointed to the Board of Trustees and we have been running this for years. The only problem we have is the Oba (Akanbi) that was imposed on the community who doesn’t want to see anybody that he doesn’t like. Because he doesn’t want to see my face, he used everything to create problems.
“The protest was sponsored by Oluwo and his brother from the same compound who is the leader of Ta’awun Muslim Society.

“I was appointed to be the Chairman of the Board of Trustees when the former chairman who is the late Oluwo died. We have been holding meetings and nobody has challenged us. The Oluwo has taken the law into his hands, doing everything to destroy the central mosque, removing people from their legitimate positions.

“Because we don’t want violence, we went to court and we have won about five cases against him.

“Oluwo has no right in any manner to appoint anybody because the Mosque doesn’t belong to him. He has no right to appoint anybody for any Islamic position. We have challenged this in law and we won. He keeps doing the same thing. They have made efforts to register another board of trustees but the law does not permit that. Having failed to do that, what they want to do now is to create problems.

“We are acting according to the rule of law since the court delivered the judgement. The constitution has given us the power, the court has validated the constitution. They should go to court and challenge our appointment as we have challenged them in the law court. They don’t have to create unnecessary problems in the community. God has always won them. We won every case in the court.

“Going by the rulings of the Holy Quran, the person he appointed without consultation to be the Imam does not have the requisite qualification according to Islamic law. We don’t want to cause violence and that is why we have kept quiet. What we are saying is that Oluwo should take care of his palace. He is not the Oba of Islam; he is Oba of the town.

The Oluwo of Iwo, Oba Abdulrosheed Adewale Akanbi has said, he has the right to appoint the Chief Imaam of Iwo Central Mosque, Osun State.

Speaking through his Press Secretary, Alli Ibraheem, Oluwo argued that it was wrong for the BOT of the Mosque to have appointed a new Imaam when there was no Oluwo.

But a copy of the judgment delivered by Justice J. O. Ogunleye on November 4, 2020, held that “The defendant (Incorporated Trustees of Iwo Central Mosque) is the holder in trust, manager of all the properties and affairs of the mosque, and any selection and appointment of the Chief Imam and/or any other chieftaincy hierarchy leading to Chief Imam without the consent and approval of the defendant in line with her constitution is null and void ab initio.”

Ogundokun said until another court set aside the ruling, he remains the Chairman, Board of Trustees and the board has the power to appoint any member into Iwo Central Mosque.

However, Press Secretary, Ibraheem denied knowledge of the court order that purportedly restrained Oluwo saying “We are not aware of any court judgement restraining Oluwo from appointing Chief Imaam.”