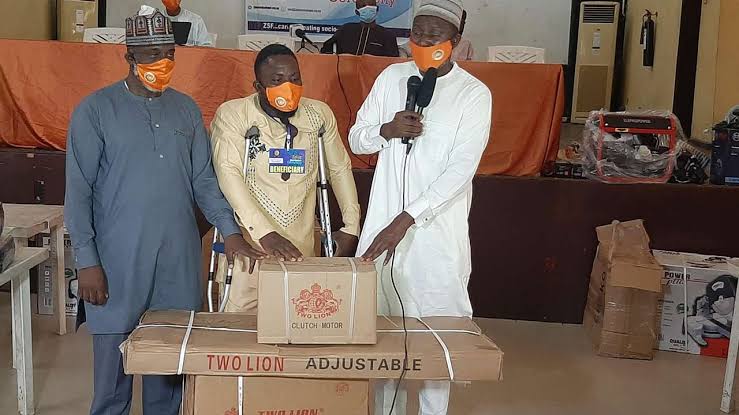 A charity organisation, Zakat and Sadaqat Foundation (ZSF) Foundation has concluded its 2021 Zakat distribution across Nigeria, with the disbursement of N255, 500,667 to 3,199 beneficiaries.

The disbursement exercise was meant to uplift the less privileged through: economic empowerment, restoration of hope for the sick, care for widows, educational support for orphans, settling of debts, amongst others.

Speaking during the Lagos edition of the 17th series of the exercise which was held at the Lagos State Chamber of Commerce and Industry (LCCI), the Executive Director and Chief Executive Officer of ZSF Foundation, Prince Sulaiman Olagunju while addressing guests, beneficiaries and other participants at the event, said the 2021 disbursement was carried out in 19 states, as well as the Federal Capital Territory (FCT), Abuja.

“To the glory of Allah and with your support, the total sum of N255,500,667 was distributed to 3,199 beneficiaries in all the states where the disbursement took place.

“The Center of Excellence, Lagos State remains the state where the bulk of the Zakat from the foundation is being distributed since we started the disbursement in the last seventeen years.”

He explained that over 60 percent of the Zakat disbursed in Lagos State was used for the empowerment of the needy and poor members in various communities.

“Over 19% was used to provide medical care to patients with different kinds of health challenges, while the rest was shared to rent accommodation, debt relief, educational support for the less privileged members in our midst,” he added.

Olagunju enjoined the well-to-do Muslims to imbibe the culture of paying Zakat as it is a religious obligation that will purify its payers and contribute to the socio-economic development of the country while appreciating their numerous donors, volunteers and other supporters.

He also appealed to the beneficiaries to make effective and efficient use of the zakat allotted to them, praying Allah to bless them so that they can start paying zakat and sadaqat in the shortest possible time.

“Let me appeal to our zakat beneficiaries to kindly use the zakat allotted to them effectively and efficiently. May Allah bless your endeavours such that you too will start paying zakat and sadaqat in the shortest possible time from now. Ameen.”

The ceremony was graced by important personalities such as the Chief Imam of Lagos State, Engr. Sulaimon Oluwatoyin Abou-Nolla, who was the spiritual father of the occasion.

The Chief Imam sued for the harmonization of zakat payment in the country, noting that efforts have been directed to implement a harmonized zakat payment system in Lagos State.

“Presently, we are on the framework for having a harmonized zakat system in Lagos. It is to our benefit if we centralize the system. We are talking about six million Muslims in Lagos. Look at it holistically, if you have that data, how do you want to plan for them? How do you take care of six million Muslims? We need to harmonize and make collective efforts. That’s how we can get resources to channel to various sectors of the economy. May Allah make it easy for us.”

Abou-Nolla lauded the efforts of the ZSF in supporting both Muslims and non-Muslims, praying Allah to continue to strengthen the donors and the management.

One of the beneficiaries, Madam Veronica Fagbami expressed happiness that she made the list.

According to her, “Since the death of my husband, no one has been there except God. When I came for the interview, I was told to pray to be among the beneficiaries. And today, I am grateful I am on the list. Though I requested money and a grinding machine, I was given only the machine. I won’t sell it. I will make judicious use of it.”

She acknowledged that non-Muslims were not denied from benefitting from the disbursement.

“Though I am a Christian, I benefitted from this initiative driven by an Islamic organisation. I can confirm that there was no sort of segregation. Those who introduced me to the opportunity said there is no bias in it as non-Muslims also benefit. That’s exactly what I saw. Except one is not lucky enough, Christians also benefit. Mine is a testament.

“My advice is for people who have the financial means to assist the less privileged ones. We are all the same, whether Muslims or Christians. All those social variables should not be considered in empowering poor people,” she added.