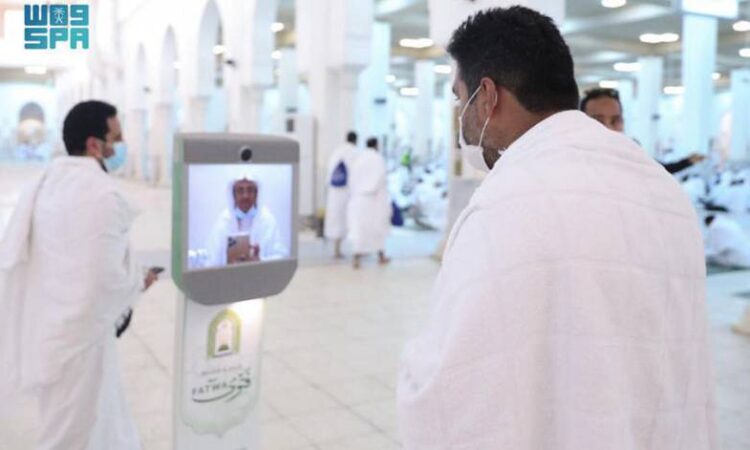 With 21-inch touchscreen “faces”, the AI robots will drive around the mosque and help answer questions or give guidance on the different obligatory rituals worshippers have to perform.

A smart stoppage system will prevent them from running into people or objects.

For ease of communication, the robots also speak 11 languages – including Chinese, Russian, English, French, Farsi and Turkish. It can even help connect them with sheikhs and scholars in different languages.

The General Presidency for the Affairs of the Two Holy Mosques said it aimed to develop and revolutionise the level and ease of services offered to the faithful during visits to Makkah, state media said.

The new robot guides are not the only automated assistance at the Grand Mosque in Makkah.

Physical distancing stickers are removed from the Grand Mosque after Saudi Arabia lifted the requirement to wear masks and observe social distancing in open spaces. All photos: SPA

There are also automated cleaning robots to sterilise the premises and thereby help prevent the spread of the Covid-19 pandemic. Other robots roam the site between 8am and 5pm to distribute Zamzam holy water bottled from the well under the mosque. Both work without human intervention using smart systems.

The Smart Robot, which weighs 300 kilograms, can carry 68.14 litres of water for cleaning. It can move at speeds of up to 5 kilometres per hour, uses cameras and overhead sensors to identify the layouts and avoid colliding with people and obstacles.

The presidency aims to help educate Muslims around the world on using new technologies – including artificial intelligence and e-learning.

For example, the recently launched Smart Quran was launched to help those with visual disabilities read the text in Braille.

Muslims from around the world can also earn a certification for participating in initiatives such as the Maqra’ Al-Haramayn, the Two Holy Mosques Reader, that teaches the Quran. The e-lessons take place from the Grand Mosque in Makkah and is available in six languages, including Urdu, English and Hausa.