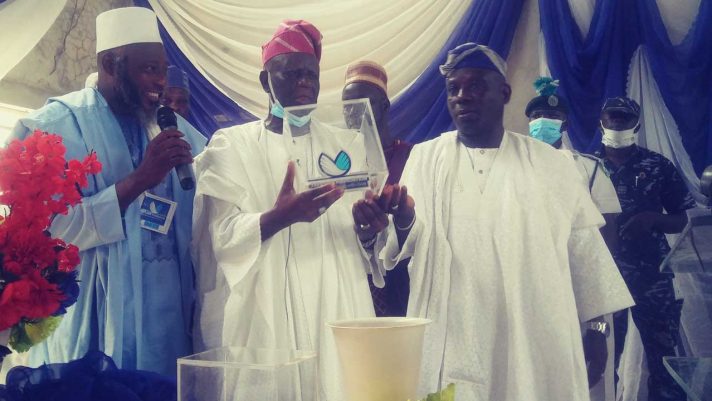 Towards ensuring that vulnerable persons have access to productive resources, including credit and education, a non-governmental organisation, Tajudeen Adewunmi Fowewe Eshinlokun Foundation (TAFESHIN) has empowered petty traders, inmates and students to critically reduce poverty in the society.

The foundation empowered 60 petty traders, distributed 40 GCE forms to school leavers who have not got their O’level requirement, assisted six undergraduates with funds to pay their tuition fee, paid four inmates ransoms and assisted two phD students working on their thesis with funds.

Speaking during the lauch and disbursement exercise, the founder of the Foundation, Alhaji Prince Tajudeen Adewunmi Fowewe Eshinlokun, said the foundation was set up to assist and support under privileged persons in the society.

“I do embark on charity but I just want to establish the foundation for continuity, so that even after my demise it will serve as charity bequests.”

“ I will be funding the foundation regularly to assist the less privileged. Even after I’m no more, I have made provision for smooth running of the foundation by donating a property for continuity after my demise.”

Eshinlokun urged the governments to intensify more on poverty alleviation programmes to empower the needy in the society.

“ Alleviating people from poverty, does not involve a huge amount of money. If you look at it, what all this petty traders need to run their business is just a token. Some of the hawkers on the road, their goods are not up to a thousand naira, any privileged person can render assistance to them. That is what the foundation is doing.”

Deputy Speaker Lagos State House of Assembly, Hon Wasiu Sanni Eshinlokun commended the founder of the foundation for his philanthropic gesture, praying God should touch the heart of the wealthy to embark on humanitarian project, which will benefit the society at large.

He urges other well to do Nigerians to imbibe the spirit of charity and learn to give to the needy as it will go a long way to alleviate people from poverty.

He noted that the state government is doing a lot to assist Lagosians overcome poverty through the ministry of wealth creation by assisting those who are in need. “ Lagos State Employment Trust Fund (LSETF) is an agency created by Lagos state Government, Mr. Babajide Sanwo-Olu to assists business owners with start up capital with a minimum of 250, 000 naira and existing business from 5 million upward.”

He said that the governments are doing their best to reduce poverty but individuals should also assist government to alleviate poverty because the level of poverty of today is too much.

“ The pandemic has effected the whole world, it is not only Nigeria that is facing the hardship. It is only God that can eradicate poverty from the society,” he said.

The Chairman Council of Imams and Alfas Eti Osa, The Chairman Board of Trustees, Chief Imam, Afinni Yoosuph AbdulBari , said the foundation is established in accordance to injunctions of Allah, noting that both Muslim and non Muslims would continue to benefit from the foundation, as beneficiaries are drawn from the general public.

Iya Adini Eti Osa, Alhaja Ramotallahi Adenokan, said the project is laudable, it has been in existence for the past 20 years and so many people have benefited from the project.

The guest speaker, Associate Professor of Islamic Studies, Lagos State University (LASU), Abdul Kabir Paramole, said in Islam foundation is known as Waqf, it can be in form of money, property and as well as a charitable gift to the less privilege.

“Waqf can be termed as a neglected charitable act in Islam especially among Yoruba Muslims. It is one of the tools Arab countries use to develop their nation and people.

“ A lot of Nigerians have the money to embark on the charitable act but they don’t have the understanding of developing minds, developing people through their wealth. Instead of putting your money in the bank, why can’t you use it on a foundation.”

He urged Muslims to embrace Waqf because it promotes love, unity, stability, and development among human beings.

“ Waqf should be well embraced by all and sundry, those who have the means to develop humanity, especially Muslims who are privilege should do. “