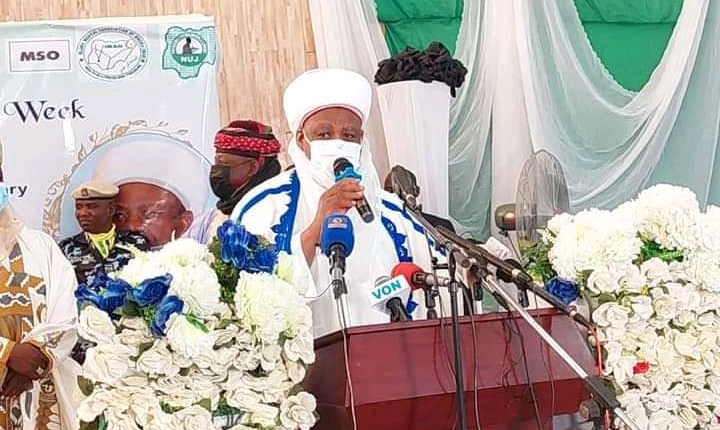 The Sultan of Sokoto and President General Nigerian Supreme Council for Islamic Affairs, Sultan Sa’ad Abubakar, has urged Muslims and Nigerians to always continue to maintain peaceful coexistence in the country.

Sultan Sa’ad made the call at a Public Lecture organised to commemorate his 15 years Anniversary on the throne as the 20th Sultan of Sokoto which was delivered by Sheikh Ismael Mufti Menk.

He said promoting peace and unity among societies would be the best way for Muslim to do as religious teaching orders.

“Let work with religious teaching to give the best way that we can in promoting national unity as a true Muslim,” the Sultan said.

The Sultan assured his total commitments to collaborate with people to offer their contributions towards resolving various challenges bedeviling the country.

According to Tambuwal, Sultan Sa’ad is a role model considering his contributions to the development of Islam, Sokoto State, Nigeria and the global communities.

He said Sultan had work tremendously in promoting peace and unity through involvement of Ulamas, Business communities, NGOs, Community Leaders and Youths group at all levels in the country.

“Indeed in Sokoto Caliphate the Sultan symbolises in all his actions as remain the role model and guide for exemplary leadership not only in the administration of Justice, but all other human endeavors,” Tambuwal said.

He explained that his administration would continue to promote and sustain legacies of forefathers.

He added that his administration was able to record many progress in human resources development, infrastructure, Amenities and health care in fulfillment of his mandates and in line with standard development set by forefathers.

The Governors of Kebbi and Zamfara States, Atiku Bagudu and Bello Mutawalle, congratulated the Sultan for his achievement within the 15 years of his leadership.

They both assured him their total commitments and cooperation to continue to promote peace and unity for the overall development of the country.

Also, the Shehu of Borno, Alhaji Abubakar Ibn Umar, described the Sultan as a leader who contributed immensely to national development, especially in the area of peace and unity.

He commended the present administration of President Muhammadu Buhari for his relentless efforts in ensuring peace reign across the country.

Sheikh Mufti Menk emphasised that a true Muslim should not be allow to be use by someone to fuel violence against one another, despite differences in faith.

He urged Muslims not to be hateful, but always learn to respect different sects of religion.

“Don’t allow any one to use you as an instrument in promoting violence and other forms of crimes against any individual irrespective of your differences.

“Learn to listen to them, understand them, no matter what they say for overall peace and unity among communities,“ Sheikh Mufti Menk said.

The highlight of the event was Presentation of Awards Personally by the Sultan of Sokoto to 5 personalities towards their contributions to Islam not only in Nigeria, but to the entire world.