HomeSOCIETYTake a look at one of the first UAE mosques designed by a woman
SOCIETY
admin1 year agoSeptember 26, 2021no commentNo tags 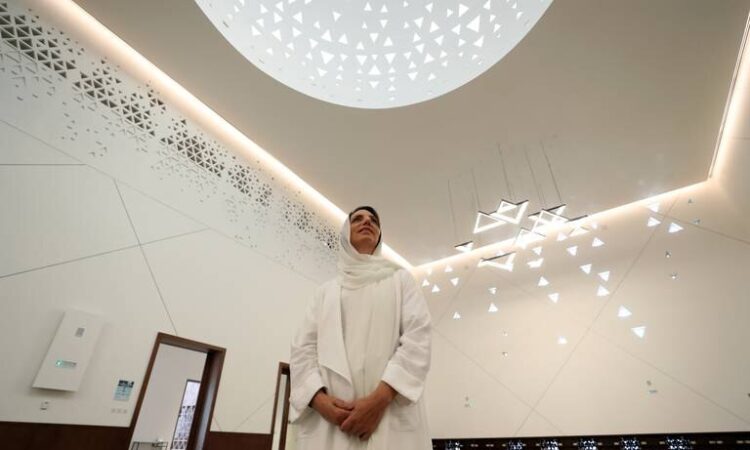 The Mosque of the late Mohamed Abdulkhaliq Gargash gleams white in the sunshine, its contemporary, clean lines stark and beautiful against the backdrop of car repair centres and cement works in Al Quoz.

But the building is unusual for another reason – it is one of the first mosques in the UAE to be designed by a woman.

Sumaya Dabbagh, the founder of Dabbagh Architects, grew up in Saudi Arabia and studied her craft in the UK and Paris before moving to the UAE.

Ms Dabbagh is one of very few Saudi female architects of her generation and among a handful of women architects leading their own practice in the Gulf region. She was disappointed to discover she was one of the first females in the UAE to create a mosque.

“I feel sad about it. I think more women should be doing this, it’s a shame. I hope to see more women designing public buildings and participating in the development of our cities,” said Ms Dabbagh.

“Women are very good at building communities and bringing people together and collaborating, and it would be a very positive thing for our industry to have more of that.”

Ms Dabbagh previously cut her teeth on cultural projects, including the much-feted Mleiha Archaeological Centre in Sharjah. The project was awarded an Architecture MasterPrize (2020), among others, and was nominated for the Aga Khan Awards (2018).

The Gargash Mosque, which can host 1,000 worshippers, was a new challenge.

“We wanted to create a haven, almost a jewel amongst the gritty, industrial warehouses around here,” said Ms Dabbagh.

The resulting structure is quietly masterful, and an oasis of calm alongside the hustle and bustle of the busy highway.

A break with convention
Sumaya Dabbagh, the founder of Dabbagh Architects, designed the new Mosque of the late Mohamed Abdulkhaliq Gargash in Dubai. Photo: Chris Whiteoak

From the moment worshippers enter the gate of the mosque, they are taken on a journey from the outer material world, through a shaded courtyard, to the ablution area, and then into the prayer hall, where the transition to contemplation can be completed.

Triangle-shaped windows puncture the walls of the mosque allowing in dynamic shards of light, and carefully-chosen passages from the Quran are stencilled onto the walls around the mihrab, and moulded into the exterior facade of the building.

The purpose of the outer calligraphy was to create a metaphoric protective band around the mosque, and the verse, “The Most Merciful” instills a sacred energy throughout the building.

Many elements in the design of the Gargash Mosque depart from the norm. There are no traditionally shaped windows – a design quirk which took time for the planners to accept, and the minbar where the imam stands to lead the prayers is set to one side, leaving the mihrab niche empty bar a shard of light from an overhead skylight.

Furthermore, the minaret is designed as a separate body, just apart from the main mosque building.

Ms Dabbagh placed sustainability at the heart of the project, sourcing the cladding and aluminium locally, and the stone from Oman, something that proved a blessing when imported building materials were delayed by the blockage of the Suez Canal and Covid-19.

Responsible development is one of the key drivers of Ms Dabbagh’s practice, along with her determination to break the stereotypes commonly held about the Gulf and Arab women.

“I just hope that more and more women continue to practice and are supported to practice, to create more relevant architecture because I think the more diverse the product, the richer it can be,” she said.