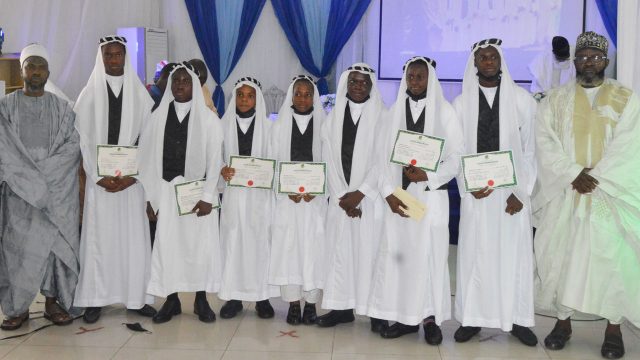 Lekki Qur’an Memorisation College has graduated seven teenagers who have successfully memorised the entire chapters of the Holy Quran and Hadith.

Lekki Muslim Ummah (LEMU) established the school in 2016, for the memorisation of the whole Qur’an, as part of her continuous efforts to expand the frontiers of Islamic knowledge and reform the society.

The graduands, Abdul-Wadud Akolade, Mubarak Ambali, Abdurahman Oladeji, Yusrohllah Lawal, Teslim Bello, AbdulGaffar Dawodu and Mohammed Oyewale upon being tested displayed skills and the bounties of God bestowed upon them of the knowledge of the Noble Qur’an. The audience was amazed when Qur’anic verses were picked at random and the graduating students read them fluently, which testified to their knowledge of the Holy Qur’an.

While addressing students, parents and guests during the 2021 convocation of the college in Lagos State, the Director of Studies, Imam Ridwan Jamiu said that for Muslims to claim back their lost glory, they must turn to the Qur’an, its memorization, study and application.

The scholar noted that Muslims were the dominant cultivators of science, medicine, education and civilization. He added that Muslim scholars and scientists who were motivated by the Qur’an’s revelation spurred the first international scientific revolution and this encouraged the study of science and seeking of knowledge.

“ Muslims developed religious and physical sciences, which ushered in the modern scientific revolution. Without instrument like the astrolabe developed by Muslim scientists, Christopher Columbus would not be able to navigate to discover America.”

“ The need to determine the direction of Qiblah in the areas distant from Makkah prompted the creation of the compass. The need to attain precision in determing inheritance as described in the Quran led to the mathematical concept of Algebra. The first hospital in Paris was built after the Europeans returned from Jerusalem for crusade where they had discovered Muslim culture and knowledge.

“ Muslim scholars were translating,doing analyses experimenting and building on the Greek scientific hypothesis when Europe was still in her dark ages and under the clutch of the church which was killing scientists as deviants.

“The first University in the world was introduced by the Muslims. The first European scientists were students of Islamic civilization. According to the BBC online site, the word algorithm is derived from the name of the Persian muslim mathematician al-Khwarizmi.”

Jamiu noted that some of the earliest and most advanced hospitals were built in Baghdad, Isfahan and Cairo in the early Islamic centuries. The doctors were highly skilled and worked hard to thoroughly understand diseases, injuries and the treatments.

“ Many Muslim doctors published influential works on medicine, for example: Al Razi made important discoveries about smallpox and is the first known writer of a book about children diseases.

“Al-Zahrawi designed new surgical tools and wrote a textbook that was used by surgeons for hundreds of years. Ibn Sina completed a huge medical encyclopedia in 1025, which was still in use in European medical schools in the 1600s. Ibn Nafis wrote about circulation of the blood in the 1200s, long before doctors in the West understood it. Science and Islam have never been contradictory but complementary.”

He added that, it has been rightly observed that science without religion is blind and religion without science is lame. Science is actually the methodological and analytical study of the signs of Allah (SWT) in nature and creature with a view to benefiting humans here and hereafter.

Guest lecturer, founder of ZamZam Academy and lecturer, Adeniran Ogunsanya College of Education, Dr. Salaudeen Munirudeen Al-Riyadh urged religious scholars, government and guardians to inculcate in the younger generation the teachings of the Holy Qur’an and Sunnah, which is panacea for all ills confronting the society.

He advised the graduands to always consider the knowledge of the holy Qur’an in their future endeavour.

“ Majority of them will not be an imam in future, we have some of them who want to be an engineers, doctors, lectures, which is different from an Imam who is always reading the Holy Qur’an”

He urged parents of the graduands to endeavor to take necessary precautions to ensure graduands don’t forget what they memorized.

“ These Children are too young to understand their role in the society as Qur’an memorisers, it is the role of their parents to guide them and ensure they don’t go astray. Create opportunity that will encourage them to revise what they memorised.”