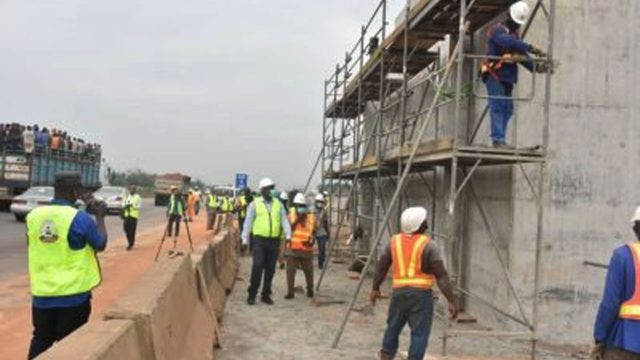 Minister of Works and Housing, Babatunde Raji Fashola, yesterday commended work progress on Lagos-Ibadan Expressway, stressing that it had reached 80 per cent completion.

The minister, who gave the commendation during an inspection of Lagos-Ibadan Expressway, justified loans taken by President Muhammadu Buhari.

According to him, infrastructural development, among others, were reasons for the loans.

He reinstated President Buhari-led administration’s determination in rebranding road networks in the country.

According to him,  apart from the Lagos-Ibadan highway, other roads like the Lagos-Abeokuta expressway and Lagos-Badagry/Agbara highway were being reconstructed by the Buhari administration.

Commenting on the state of work along the highway, Fashola said the contractors have covered a long-range, citing the lengthy kilometres covered from Ogere, Sagamu, Kara and to Lotto flyover.

According to him, there remain only about 20 kilometres to cover up to the Lagos end.

The minister, who went with the Ogun State Governor, Dapo Abiodun said additional land measuring up to 750 metres in width and one kilometre in length would be required on both sides of the highway for the safety of road users.

Governor Abiodun extolled the minister, saying he and Fashola had been consistent in talking about the deplorable state of the road and how to get it fixed on time.

Regarding the minister’s request, Abiodun vowed to provide additional land, contending that he would do all it would take to see to the success of the project.

He also decried the sorry state of the Lagos-Ota highway, saying it is an industrial hub of the nation.

On the deplorable state of  Ota/Idi-iroko road, the governor said the state is working with Otunba Mike Adenuga to reconstruct the road.

He stressed the need for a new design and re-evaluation on the part of the Federal Government to achieve this.