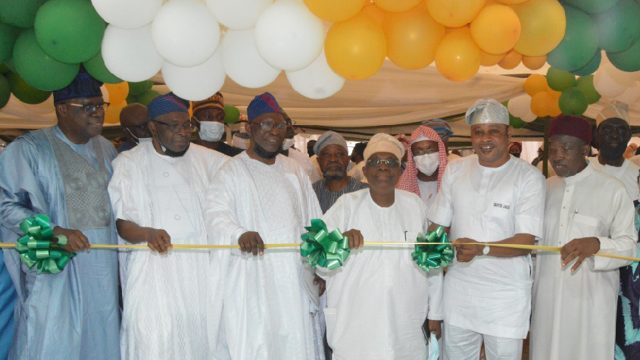 The Arabic institution was founded in 2015 and runs a daily Hifz-ul-Qur’an (Qur’an Memorizsation) programme for both children and adults.

The edifice was commissioned by Deputy Governor of Lagos, Dr. Kadiri Obafemi Hamzat, who was represented by the Special Adviser to the Governor on Islamic Matters, Hon. Jebe Abdullahi.

Speaking during the commissioning ceremony, The President of LEMU, Dr. Kamoru Omotosho, said one of the objectives of his administration is to improve on the existing administrative structure and ensure the sustainability of the Ummah to make the beautiful religion of Islam lead by example.

According to him, “we are not too shy to admit that we have not got the wherewithal to achieve these lofty objectives singlehandedly. We rely on the participation and support of the best minds in our Muslim community to assist us in realising these dreams promptly.

“With utmost humility, may I express our appreciation to the chairman and members of the Board of Trustees and previous members of LEMU Executive on whose shoulders we stand upon to achieve what we are witnessing today.

“We have benefitted immensely from members of the Muslim community as a whole and profusely thank you all,” he added.

Omotosho commended the unique contribution of the committee towards the completion of the project.

He said, “The BOT Chairman, Retired Vice Admiral Jubrila Ayinla made the chunk of the contribution at the first fundraising exercise.

Funding projects in this Mosque is virtually in his DNA! Alhaji Razack Adeola, the Chairman of the Special Project Committee and his members exceeded our expectations in raising funds to accelerate the speed of execution of the College Hostel project. Our Chief Imam and spiritual leader, Sheikh Ridwan Jamiu, who has been passionate in his vision for a world-class Arabic and Islamic Institute has been ever consistent in his efforts to make it a reality.

“Engr. Lekin Adedo, the CEO of Diamond Engineering Company, is never tired of saying yes to our requests with unparalleled generosity with his resources. You will never lack by God’s grace. Finally, the Chairman of the Project Committee, Vice President, Dr. Labinjo who has consistently put in all he has got in time, talent and treasure, just to make sure that this will not be an uncompleted or abandoned project. It is only Almighty Allah that can compensate you. He will make it as acts of Ibadah for you and your wife, who has been assisting directly and remotely,” he added.

The Chairman of the Special Project Committee, Alhaji Razack Adeola said the leadership of LEMU has formed a strong governing board with members consisting of people of unquestionable character, who will be dedicated and committed to the project.

He called on the students whose goals of enrolling at the College is to become Hufaadh (complete memorisers of the Noble Qur’an) to study and understand the Qur’an.

“My third advice goes to the students who want to become Hufaadh. You don’t know how lucky you are. Most of us have advanced to some extent in age and are always happy when we see you reciting the Qur’an. We wish we could be like you. We envy you more than you envy us.

“In fact, you don’t envy anyone because the knowledge of Qur’an would have taught you that this life is meaningless, because we come with nothing, we go with nothing. Please, study the Qur’an, master and understand it so that you can become worthy and dedicated leaders,” he added.

Chairman of the newly inaugurated Governing Council of the College, former Attorney General and Commissioner for Justice in Lagos State, Mr. Adeniji Kazeem expressed joy for the privilege of being invited as a special guest of the occasion and his new position.

According to him, “When I received the invitation letter, I was extremely joyous. It is not because I was invited as a Special Guest, but upon realisation of the immense benefits and development that this Qur’an memorization College will bestow on the Muslim Ummah in Lagos State and Nigeria.

“This wonderful and rare project will serve as an outstanding platform for numerous Muslim children in Nigeria to develop a real interest in Qur’an memorization. It will also serve as a precursor to growing Islam in the state and beyond.”

The Chairman appreciated the people who contributed and committed their funds and time to ensure that the project was successfully achieved and became a reality.

“I must confess that when I was first approached, I was worried about being able to cope with the responsibility, considering my very busy schedule and I am sure that was the same for many other board members.

Kazeem noted that the Governing Council aims to ensure that the College meets global standards of excellence in its teaching and discipline so that the entire Ummah will be proud of this Institution.

“We aim to set high standards for the college and will ensure they do not drop in any way. We will also ensure that the aims and objectives of establishing this College are not misinterpreted by the un-informed and so we will be very vigilant in ensuring compliance with our rules and regulations.

“We understand that this College and other educational institutions under the Board of Governors oversight are meant to key into the broader vision of the Lekki Muslim Ummah Institute of Arabic and Islamic Studies and in shaa Allah, I predict that this vision will come to fruition in our lifetime for the greater benefit and glory of Lekki Muslim Ummah and the entire Muslim community,” he added.