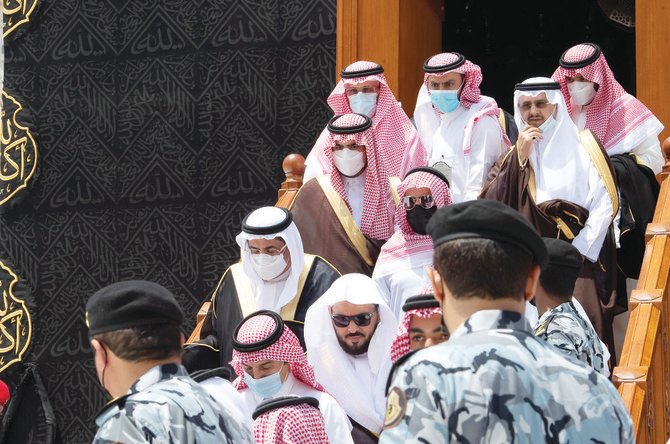 On behalf of King Salman, Makkah Gov. Prince Khaled Al-Faisal washed the Holy Kaaba on Monday. Participants in the ceremony included Deputy Makkah Gov. Prince Badr bin Sultan bin Abdul Aziz, Acting Minister of Hajj and Umrah Dr. Issam bin Saad bin Saeed and the head of the Presidency General of the Two Holy Mosques Affairs Sheikh Abdulrahman bin Abdul Aziz Al-Sudais.
Prince Khaled washed the inside of the Holy Kaaba with a mixture of Zamzam and rose water, amid high preventive measures to limit the spread of COVID-19.
Al-Sudais stressed that the occasion highlights the great attention that the Kingdom’s leadership offers to the Two Holy Mosques.
He pointed out that the Prophet’s biography mentioned taking care of the Holy Kaaba as a sign of respect for its sanctity.
Al-Sudais also highlighted the care offered by the Saudi leadership to the Two Holy Mosques and their visitors since the time of the late King Abdul Aziz to the reign of King Salman and Crown Prince Mohammed bin Salman.