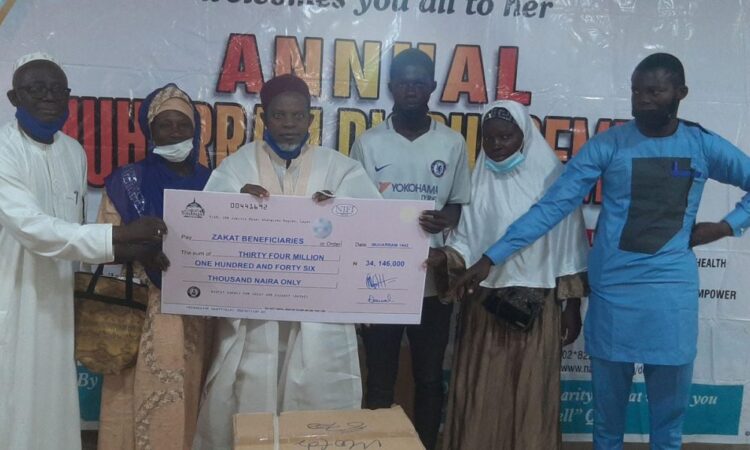 In an effort to empowered vulnerable Muslims, NASFAT Agency for Zakat and Sadaqat (NAZAS) has supported 240 indigents with N34 million.

Speaking during the group’s Annual General Meeting (AGM)/Muharram Zakat Disbursement, the Chairman of NAZAS Board of Directors Hafiz Bakare said the vision of the agency is to unify Zakat institution for the Muslim Ummah.

“The agency has continuously attended to the needs of people with urgent health requests as well as provided educational scholarship grants to over 120 students annually while not relenting in organising Health Missions in communities, which had benefitted over 2,000 indigents. The aged on regular monthly stipend are growing on a yearly basis with good testimonies. Partnership with like-minded individuals and organisations has brought relief to the poor and needy through our food distribution initiatives with over 1,000 beneficiaries,” he said.

NAZAS, he said, has also lifted the Internally Displaced Persons (IDP).
“Since inception of the NAZAS in 2014, the agency has empowered 40,000 indigents with N350 million.”
NASFAT President, Alhaji Niyi Yusuf, commended directors on the board, management team, Zonal Advisory Councils and donours who contributed to generate the performance of the agency.

“ I thank all donors who have entrusted their Zakat to NAZAS. I also thank the management for this symbolic public presentation. “

The Chief Imam of the Nasrul-lahi-li Fathi Society of Nigeria (NASFAT), Abdul Azeez Onike, said if Zakat is well administered, poverty would be reduced to the barest minimum.

Onike said Allah blessed some people with wealth to cater for the poor.

General Manager of NAZAS Mufutau Adelotan said 240 persons, benefitted from N34 million disbursed in the month of Muharram. He urged the beneficiaries to make good use of the items received.

According to him, the government can partner with NAZAS by enlightening their Muslim workers to give back to the society through paying Zakat and sadaqah.

He appealed to the government to provide amenities that will make people not to lack, so there won’t be need for people to request for Zakat as much as they do now.

A beneficiary, who is a fashion designer,Alimah Titilope who was empowered with an industrial sewing machine commended the agency for relieving her of sewing with a manual machine. “ With the new machine that NAZAS empowered me with, I will make more money, it will perfect my work and give room to my apprentice to assist my work and make more money. I pray that God should continue to bless the agency,” she said.